You are here: Home / About NYC AC&C / Failed Adoptions / What Happened To Beatrix? 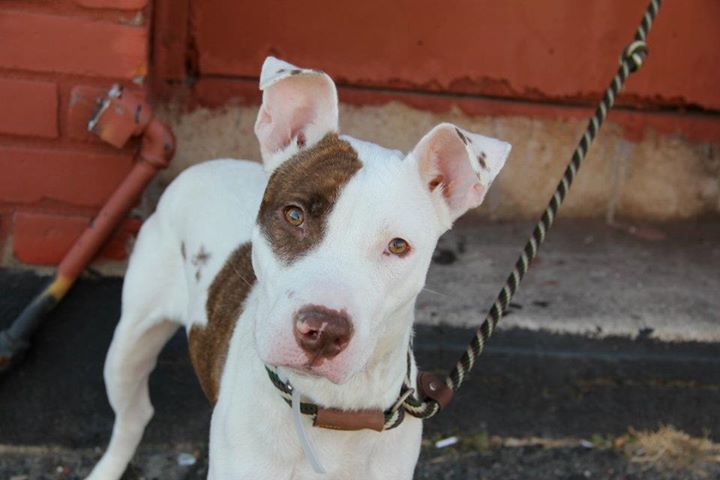 We are all here for the same reason. We love dogs and want to save them from a needless death. We work tirelessly day and night trying to keep them from making that walk to the kill room. We live for the Freedom pics and love to see those smiling faces as they start their New Beginning. We celebrate the lucky ones that leave thru the front door.  We mourn those whose luck runs out.  We weep for them, sometimes wishing just one person had fought harder or they had just been given a little more time.

With all the heartache we see in the Gone folder, it may be hard to imagine anything more devastating than a beautiful life cut short. It seems impossible to think that there are worse fates than the needle of poison administered in that cold euth room by an uncaring stranger.  But there is something worse and today we here at UP2 are so painfully reminded of this.

On Jan 31st, a super friendly, syrupy-sweet pittie girl was brought into the Brooklyn ACC.  Really, they described her as “super friendly” and noted that she was, “very easy to examine.”   She was already spayed with a green tattoo on her belly near the incision scar– which means that she was most likely spayed by the ASPCA.  She was once someone’s pet yet here she was a “stray.”  She was given the name Beatrix. We watched her thread hoping someone would notice the blur of her tail in her intake picture; hoping that someone would see her beauty against that horrible blue backdrop.  Then a week later came her new pics.  We thought “oh wow, now everyone would see just how stunning she is.”  From her silky white coat punctuated with brindle patches, to her pink and brown nose, to her pointy polka dot ears that flopped at the end, Beatrix was a true beauty.  When we learned that she was adopted, we were ecstatic. Her adopter did not come on her thread and we did not receive any Freedom pics, but that is ok.  Not everyone sends pictures, and let’s face it, not everyone who adopts from ACC is brought there by Urgent.  Beatrix was moved to the safe folder because she was by all accounts “safe.”

On Thurs, March 15th, just one month after walking out the front door, Beatrix was back at ACC.  But she wasn’t the same dog. She was brought in at deaths door – emaciated, hypothermic with a body temp of 92.6.  She was dull, depressed, covered in bloody diarrhea.  She was covered in bite wounds.  Multiple bite wounds.  Our sweet tiny Beatrix was attacked by dogs, her neck so badly bitten that blood gushed from her wounds. Bandages were placed on her neck with pressure to staunch the flow of blood. Warm IV fluids were given to raise her temp. We immediately posted her and put out a desperate plea “Someone please help her.”  A rescue called in and was told she was being treated.  For 2 days, no new information surfaced. ACC sent out no pleas. We learned today that Beatrix did not make it, that she is gone.  At some point she was transferred to a vet but it was too little too late. The wounds she suffered were too severe. She had lost too much blood.

What happened? What went wrong? A month ago she was moved to the safe folder. Today we move her to Gone. Once again, ACC failed a perfectly healthy, perfectly adoptable dog.  But they did more than fail her.  They betrayed her. We all know the level of “care” at NYCACC is substandard. We all know that they are too quick to kill– to walk these healthy or easily-treatable dogs to the room of death.  But now we all know that there are some fates that are worse than that room.  Part of “rescuing” is to keep these animals not only from death, but also from abuse, hunger, thirst and pain. Beatrix was not shielded from any of this. She was adopted to someone that either did not care and let her loose to fend for herself… or something far worse.  Something far more sinister. It is difficult to imagine that someone adopts any dog with the intent to cause harm, but it is damn near impossible to imagine that anyone could adopt Beatrix with the sole purpose of destroying her in the most inhumane way.

Will we ever know which it was – carelessness or ruthless intent?  Probably not but the bottom line is the same either way.  NYCACC adopted Beatrix out. Once out of their “care” she was starved and abused. Her flesh was torn from her body by her own kind. She was brought back, her tiny body clinging to life. And now, she is gone.  Beatrix was failed. Beatrix was betrayed. She is gone, but she will certainly not be forgotten. We will remember her.

We want to see the person responsible for this horrific cruelty brought to justice. We want answers and we know you will too. So NYCACC… what are you going to do?  Beatrix is dead.  Will anyone be held accountable for her death?

To ask NYC and the ACC what they will do to find those responsible for Beatrix’s death, please fill out the form here: http://www.urgentdeathrowdogs.org/how-you-can-help/how-togroup1/act.html

Next: Welcome to the Barkside – I »
« Previous: URGENT In The News!