Urgent Part 2 reached an important milestone on Sunday, May 18th, when we received our 100,000th page “like.”  A quick glance at the scoreboard of our folders shows 35 GONE and 111 SAFE folders, so it would seem that we are making a positive difference for many of the dogs who have entered the NYCACC system.

We didn’t make enough of a difference for Luna. 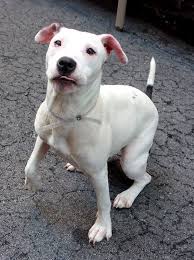 Luna 999798 was an 8-month-old puppy who entered the shelter system on May 14th because of friction between her former owners and their landlord. In her home setting Luna was a friendly, active puppy who lived with people of all ages, got along with cats, and was progressing nicely in her training. Her former family suggested that Luna should be placed in “a home with kids,” a “nice and caring home,” as if those wishes could dictate what the future held for Luna.

On the morning of May 14th Luna belonged to people she deeply loved; by the afternoon of May 14th, she didn’t. By May 15th Luna had already spent her first night in the ACC, her bright personality shaken and her nerves starting to get the best of her. Her initial intake exam served to complete her entry into the shelter system but failed to diagnose the prevalent skin condition which could only have been causing her even more stress; that was stress Luna didn’t need. On May 16th this hyper, itchy puppy was given a SAFER evaluation and her inconsistent behavior resulted in a New Hope rating; Luna was going to need extra help getting out of the ACC system alive.

The rescues who could have pulled Luna to safety were fully aware that she needed them. Those rescues could not, responsibly, commit to taking Luna unless they had somewhere for her to live. The rescue groups had the power to pull Luna to safety but without the support of just one person who could provide her with a safe landing, that power ultimately meant nothing.

Volunteers did provide extra photographs and a video of Luna, and shared heartfelt comments which reminded anyone who could save Luna that this little girl was just plain scared. We got to meet a puppy who was already beginning to trust at least one person, and who could have opened up to trusting even more people if only she had been given that chance. Luna missed her chance at trusting again and loving again, because the one person who would have saved her life, never even knew she was there.

Luna needed to be seen by someone who was not looking at her Facebook thread.

Luna needed more exposure than those 100,000 page “likes” could provide. Luna needed to capture the heart of someone who was watching TV and thinking about getting a puppy; she needed to capture the soul of someone waiting for the train that would carry them home to their large, empty back yard. Because no one beyond Facebook knew she needed them, Luna died about 6 hours before the Facebook page designed to help save her life, got their 100,000th “like.”

Urgent  would like to expand our reach beyond Facebook so that more animals like Luna can be saved. Thanks to an army of admins, crossposters, volunteers and even detractors, we have accomplished a lot here on Facebook; just ask the dogs in our 111 SAFE folders. But we are still losing too many lives to the NYCACC. Our politicians and our public still need to be educated about Luna, about what happened to her and why. About how they can stop it. About how they can help.

You can help us reach the person who would have helped Luna, by donating $1 to the Urgent Media Campaign.

We are sorry we failed you, Luna, and in your honor, we are not giving up.

Urgent exists to save animals like Luna, not to shuffle pictures around on a Facebook page. We want to educate more people about the plight of our Death Row dogs and cats because we know that educating people is the key to changing how they behave. Every person who learns about our Death Row animals is changed by that revelation; every person who learns about our Death Row animals can make a difference in their lives. We would love to be able to take our page down because these dogs and cats were no longer in danger, because they no longer needed us to be their voice. The reality is, there will be another euth list tonight, full of animals just like Luna. There will continue to be euth lists every night from now on, until the Urgent mission can be broadcast on a much larger scale.

Urgent is making plans for an advertising campaign that will reach the person who would have helped Luna, had they only known she needed them. We have received great deals from Time Warner as well as CBS Outdoor and would love to do both this summer, but our plans for TV and billboard advertising are wishful thinking until we get the funds to make them real. Our initial goal would pay for 200 commercial ads to be played over a 1 month period (stations such as Animal Planet during the Cesar Millan show was one spot offered,) as well as billboards being placed in NYC subway terminals.

We need your help. We ask each of you to donate a single dollar toward this Urgent Media Campaign in Luna’s honor so the next little girl does not have to die while waiting for someone who never comes.