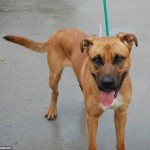 By Danika Fears, TODAY
Cats may have nine lives, but Buster the dog must have a few as well. The 63-pound Rhodesian Ridgeback-shepherd mix, who ran away from his New York City home a few weeks after Hurricane Sandy hit, was just hours away from being euthanized on Dec. 12 when his owner’s friend, Kim Fraser, spotted his face on the Facebook page for Urgent Part 2 — a nonprofit that advocates for “Death Row Dogs.” Animal Care and Control had posted Buster’s picture on its nightly euthanasia list, and he was scheduled to be put down the next morning.